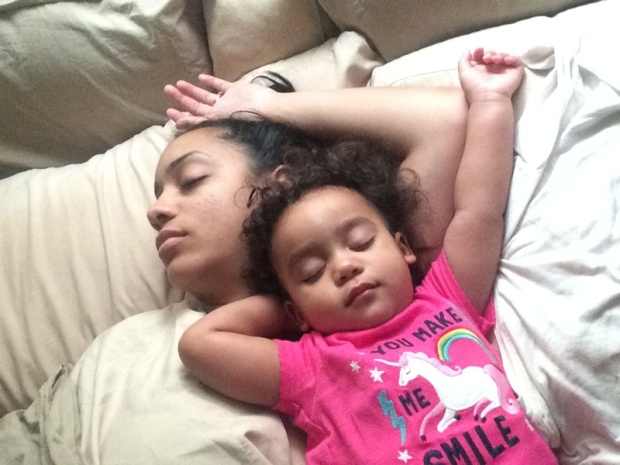 At our daughter’s 15 month checkup last October, my husband and I were asked by her pediatrician about Petra’s sleeping arrangements and how she was sleeping through the night. She sleeps very well throughout the night (disregarding teething, sickness, or the night before a developmental leap), but we informed him that she was still sleeping in our bed.

He was concerned that she wasn’t falling asleep on her own in her crib. I was surprised that he had an opinion on this. I politely said with a laugh, “We’re not bothered by it, and I’m sure she’ll be sleeping on her own by the time she goes to college.” He raised an eyebrow and replied “Well, I know families whose teenagers still sleep with them.” 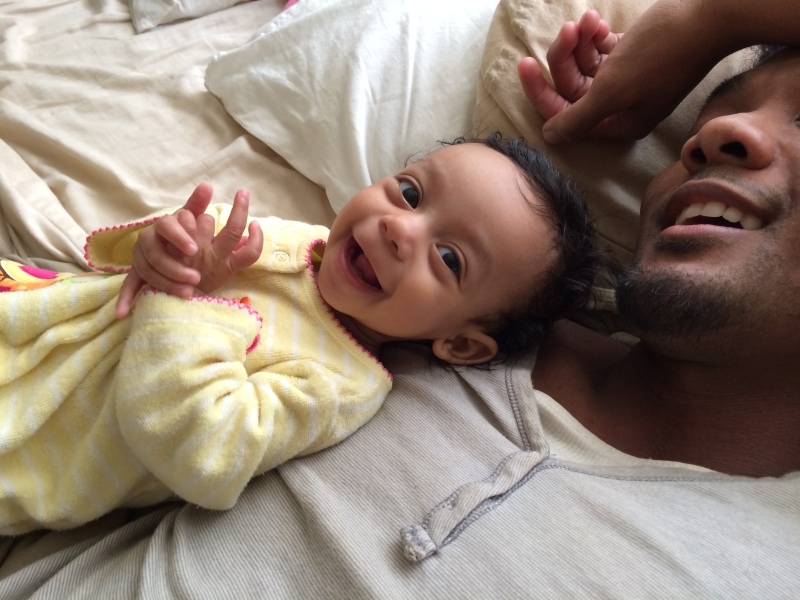 Believe me, I never imagined co-sleeping this long. After setting goals of “three months post-partum, six months post-partum, and okay maybe at a year”, getting her to sleep in her crib all night just wasn’t working out. I camped out next to her bed one night because stumbling to her room in the middle of the night when she cried out no longer seemed safe. After picking her up, nursing her back to sleep, and placing her in her crib multiple times that night I said to myself “This is not the business. This sucks. I’m bringing her to bed.”

Sure I could have tried every method I’d researched and finally made headway after two or three nights, but the truth is it wasn’t that important to me. I’ve never been eager to rush my daughter’s independence because that’s not my parenting style. Especially since she’s been a very attached baby since birth, I wanted to take that part of her personality into account. (No, not all newborns are clingy, so it’s not just a newborn thing.)

I’m not knocking anyone who doesn’t co-sleep and I truly applaud anyone who gets their baby to sleep through the night at six weeks old. I personally know parents who have tried everything to get their baby/toddler/child to sleep through the night and the kid is not having it. There are also plenty of babies that refuse to sleep in their parents’ bed and don’t want to cuddle with their mom. That’s not a problem either. 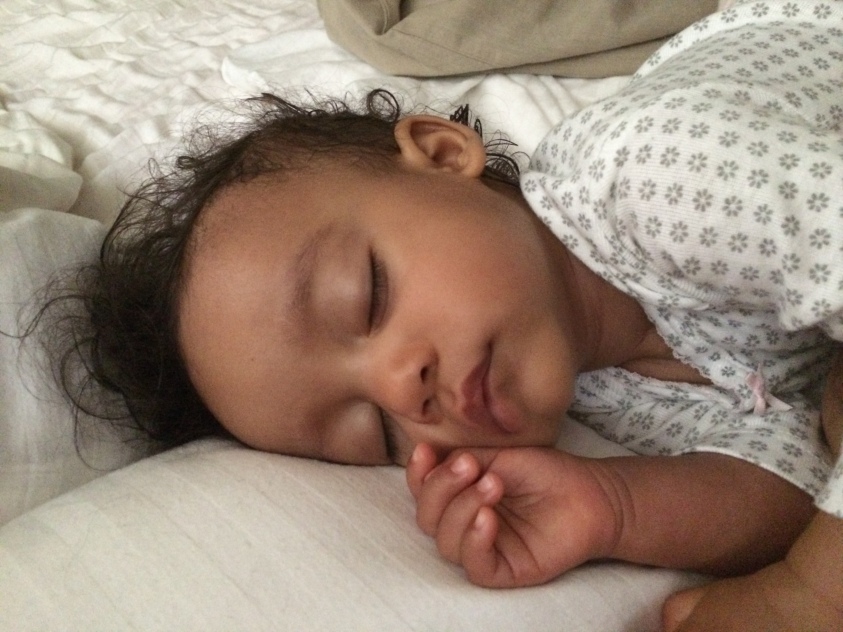 Some parents can lay their baby in their crib half awake and come back in the morning to them smiling and playing in their crib. I believe this will happen over time and I’m really looking forward to the bittersweet day where me and my husband say goodnight to our daughter and lay down in our own childless bed. In the meantime, I still enjoy the middle-of-the-night cuddles, her waking up with a huge smile and saying good morning while she kisses my face and hugs my neck.

Here are some common questions about co-sleeping that I’ll answer from my own personal experience, but I am not a doctor and I can’t tell you what’s best for your family.

Isn’t it dangerous to co-sleep?

Ask some experts, and they will tell you that you will roll over and kill your baby if they’re in the same bed with you. Ask other experts, and they will tell you about the dangers of SIDS when an infant sleeps in their crib. It all depends on who you ask. Be safe, have a guardrail, don’t get drunk or high and sleep with the baby, or if you sleep wild and it takes a bomb going off to wake you out of your sleep, I’m not sure it would be the best idea to have a newborn in your bed. 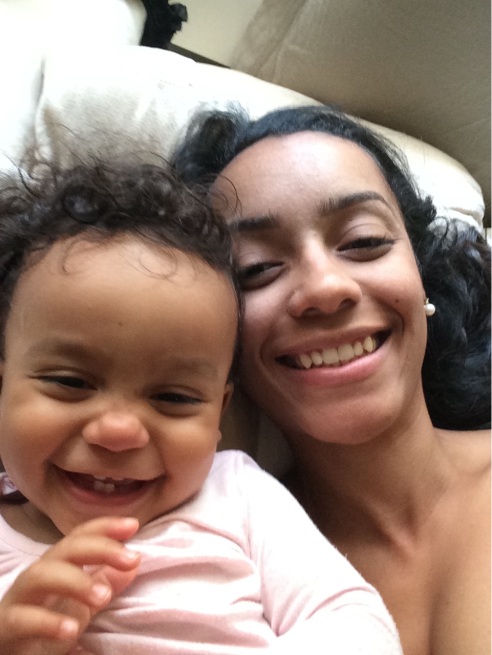 Why did you choose to co-sleep?

I didn’t. It chose me. We had a bassinet in our room, and her crib all set up in her room before she was born. I honestly never intended to, but when we brought Petra home it wasn’t realistic for me to get up with a VERY sore body multiple times a night to nurse, or to try to wake my husband who sleeps like a rock. After about two weeks, I was less sore, but so used to it that I didn’t bother changing. Also, after doing my research and talking to other moms, I found a lot of great reasons to co-sleep.

Doesn’t it affect your intimacy?

My daughter still takes naps in her own room. That being said, night time isn’t the only time for romance. And THAT being said, having a kid at all will most definitely affect your sex life. It is however very important that you and your significant other be in agreement about something like this.

The first few nights we co-slept when Petra was a newborn, she slept on my chest because that’s the only way she would sleep. That definitely took some getting used to. I’m not a wild sleeper, and I’m a light sleeper, so I just made sure she wasn’t under the sheets or with her head surrounded by pillows. If anything, now that she’s a toddler, I’m dodging knees, feet, and elbows so I’m a little more concerned for us parents. 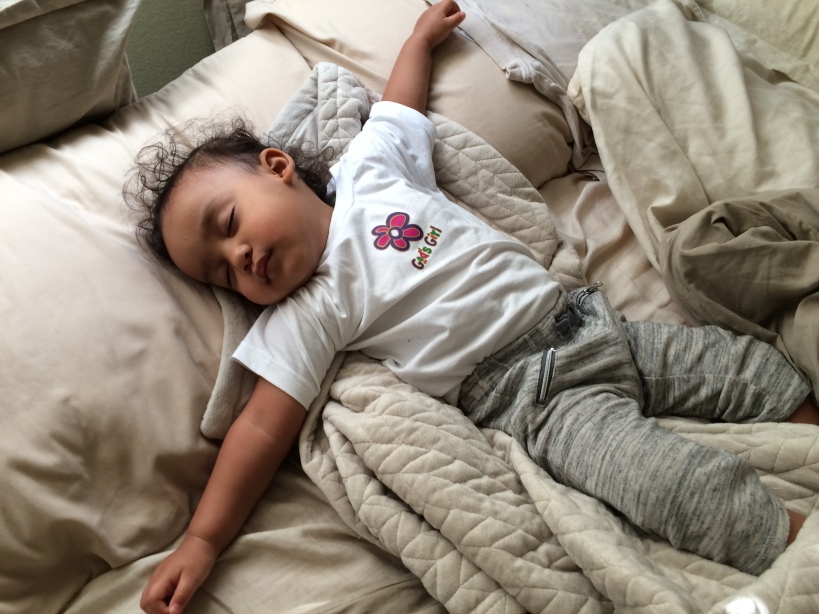 How do you get any sleep?

You most likely won’t get any sleep at all if you have a newborn, so it was actually easier for me to have Petra right next to me to make breastfeeding easier. When she did sleep in her room some nights, I found it very hard to get any sleep because I was anticipating her next cry or I would hear phantom crying and it would keep waking me up. Another thing is that some my friends who have gotten their kids to sleep through the night still have sleep regressions to deal with and getting them to sleep through the night again is like starting from scratch every few months. We’ve had those nights as well, but fortunately she was an arm’s length away.

Once again, I’m not recommending this or shaming anyone who doesn’t co-sleep. And I’m not an “expert” or professional, so please take this as personal experience and nothing more. Thank you so much for reading, and I hope you found this helpful.

So, that’s that for now.  Be blessed and take time to make your dreams into your reality.

I found some helpful links for further questions on babies sleeping through the night and the benefits co-sleep. (Of course you can find any research to support your own preference, so please read with an open mind.)

Should my baby be sleeping through the night?

Why do babies wake up during the night?

What are the scientific benefits of co-sleeping?

Ten reasons to sleep next to your child.

How co-sleeping affects the family.

What are some safety measures to use during co-sleep?